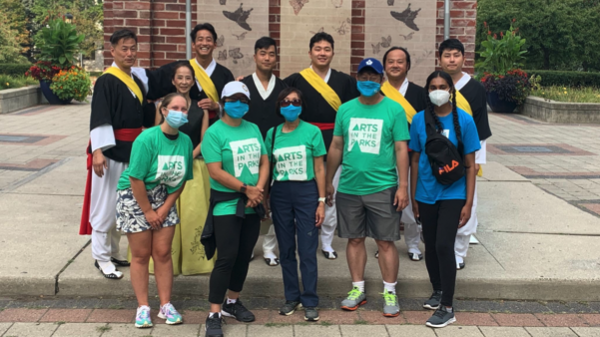 Ensemble Jeng Yi is a Korean performing arts ensemble based in Toronto. The group has entertained audiences with their exciting repertoire of original compositions and traditional pieces. Not just talented drummers, the members are also accomplished performers of the ribbon-hat dance in which each member spins a ribboned-hat called the sangmo-all while dancing and drumming!

The Ensemble begins their Arts in the Parks events by playing their traditional Korean drums at a distance from the audience, their banners, and the area of the park they utilize as their stage. Instead, the Ensemble begins further into the park, out of sight from the audience. In turn, once they begin to play, the sound of the drum reverberates through the park, bouncing off of the buildings surrounding the area and traveling throughout the neighborhood. Everyone in the park then finds themselves looking over in the direction of the sound. We see Ensemble Jeng Yi playing a single drum, signalling to both the immediate audience and the park’s patrons that an event is beginning- and one they won’t want to miss.

The Ensemble then all begin to play at once with a shout! The performers dance closer together to form a tight circle, and then expand again to begin walking towards the audience and into the park. The audience and park patrons watch as Ensemble Jeng Yi parades through the park, drumming towards us.

Ensemble Jeng Yi then moves into a line, and the ribbon-hat dancing begins. The performers whip their heads back and forth and dance in rhythm to the music, sending the long, thin, white ribbon through the air in spirals and circles around them. It is truly breathtaking to see Ensemble Jeng Yi perform the ribbon-hat dance in such precise and synchronous movements, as each performer sends their ribbons to the left and the right, while dancing and drumming simultaneously.

As Ensemble Jeng Yi bows and ends their first performance of the show, the audience erupts into applause. The audience included families and children, young and elderly couples, and young adults, all enjoying the beautiful performance. I saw so many people who were passing through the park stop and watch the performance too! Some people from the neighborhood even set down their groceries for a second to take in the performance before continuing on their way home.

Next up in the show was a performance by Ensemble Jeng Yi’s special guest Joo Hyung Kim, as she performed her own compositions on the Kayagum, the traditional Korean Zither. Once again, the beauty of the music was amplified by its surroundings in the park: as the sound of the drums reverberated through the park, buildings, and neighborhood, so too did the music of the Zither. Each plucking of the strings harmonized with each other and rang out through the park.

Ensemble Jeng Yi performed in three gorgeous North York parks for each of their performances this summer. First up is Gibson Park is located near the Gibson House Museum, which memorializes the 19th century lifestyle of the Gibson family. The park also includes a mural commemorating the Gibson family, newly planted apple trees, and a heritage garden full of heirloom roses and beautiful perennial plantings. Ensemble Jeng Yi’s performance took place amidst the heritage garden, allowing patrons to walk through the park and the garden to take in all of its natural beauty during the performance.

Princess Park is just around the corner. The park is made up of a cobblestone square lined by trees, grass, and bushes. But the centerpiece of this park is the historic clock tower in its midst. A tall beautiful brick clock tower is placed in the center of the park, which was once a part of the North York Fire Hall built in 1942. When the Fire Hall was demolished to make way for a retail and condo complex, the colonial revival style clock tower was saved and moved to Princess Park in 1989. Now, the clock tower stands strong still in the park, and provides a beautiful backdrop for Ensemble Jeng Yi’s performance.

And finally, across the street from Princess Park is Lee Lifeson Art Park. The park is named after iconic Rush musicians Geddy Lee and Alex Lifeson, who were childhood residents of the neighbourhood. The park also includes an amphitheatre featuring two glass mosaic art pieces by Paul Raff Studios: a mural of Lee and Lifeson, and a sculpture entitled Limelight. Surrounding the ampitheatre are paths, tall trees, and flowers making up the greenspace of the park. Limelight is a grey shell-like bandstand for performers to utilize as a stage. The complex shape of the sculpture serves to project the music and sounds of the performers towards the audience. And of course, for Ensemble Jeng Yi the sculpture projects the sounds of the drums and the Zither into the park and throughout the neighborhood for all to hear and enjoy.

It was incredible to not only enjoy the drumming, dancing, and music, but also to learn about traditional Korean culture from Ensemble Jeng Yi. I also so enjoyed being introduced to three gorgeous North York parks, each with their own rich histories and unique installations. Ensemble Jeng Yi, thank you for sharing your beautiful show with us!

Be sure to follow them on instagram for updates. Ensemble Jeng Yi will be performing in Edgeley Park on September 29, stay tuned to the Arts in the Parks website for more information!